November 19, 2016 “Oklahoma tightens down on earthquakes but will it be in time?”

On Sept. 3, the most powerful earthquake ever recorded in Oklahoma struck about a mile from Linda Hazlip’s home. She ran frantically from one end of the house to the other, as vases smashed to the floor, paintings fell from walls, dishes and cups flew out of the cupboards, and the large buffalo head above their fireplace crashed, breaking one of its horns.

Hazlip and her husband, Mike, built their dream home three years ago in a rural area near Pawnee, about 125 miles miles south of Wichita.

During the earthquake, their house rattled back and forth, cracking the foundation of the garage, knocking the ice machine into a wall and dislodging a boulder from a retaining wall outside.

Inside, the walls began to tear. Cracks formed from the corner of nearly every doorway and window toward the ceiling. The porch dropped eight inches, and the four posts that were supposed to be its support dangled helplessly off the ground.

Mike, who had stopped for gas on his way home from Tulsa, took a call from his wife, who was hysterical. She interrupted herself, mid-sentence. “I’ve got to go,” she said. “It looks like there’s something burning in the barn.”

Volunteer firefighters from several jurisdictions tried to douse his propane tank and an oil tank for his generator to prevent them from exploding.

Mike increased his speed from 85 to 95 mph. He could see a cloud of smoke from 20 miles away, and as he pulled up into his driveway, the barn was engulfed in flames.

On Thursday, more than 10 days after a 5.0 magnitude earthquake struck, most of Cushing’s historic downtown was still roped off with yellow caution tape. Workers were spackling cracks, removing loose bricks and digging trenches around buildings.

Loose bricks at the top of Cimarron Towers, which provided low-income housing, had caved in during the earthquake. An out-of-town construction crew had come in with cranes to shave off walls of brick at the top so they wouldn’t fall on passersby.

The Duncan Theatre across the street was empty. Ten days before, on Nov. 6, Chris Reid had been watching “Dr. Strange” with his wife when he heard a cracking boom. The movie starts with a wild sequence during which one of the characters twists buildings and streets upside down and sideways.

So when Reid heard the bang, at first he thought it was a special effect. But then almost immediately the power went out and a wall near the front of the theater fell into the seats, he said. It had been a light night, with only 25 or so people in the theater, so no one had been sitting underneath the wall. Reid wondered if terrorists had taken out the town’s critical oil infrastructure. Cushing stores hundreds of millions of gallons of gas above ground, the most in the country.

Four days later, on Nov. 10, a wall of bricks that stretched along a whole city block suddenly tumbled over onto the sidewalk, destroying one of the town’s most recognizable murals that had depicted a windmill, a steam train, a crop duster and several storage containers and barrels of oil.

The only part of the mural that remained was a cow, now severed in half, a jagged piece of train and, unperturbed, all of the oil….Continue reading

The risk of a large earthquake striking Oklahoma next year — and rattling buildings in Wichita — has decreased, according to a study published last week in Science Advances.

But it will still be more than 50 times higher than it would be without wastewater injections from the oil industry, according to the study by one of the world’s leading researchers on man-made earthquakes, Mark Zoback of Stanford University.

Officials from Cushing, Oklahoma, said that its residents escaped some close calls during Sunday night’s magnitude-5.0 earthquake, with only one injury reported so far.

But the damage to its downtown required the evacuation of 45 people and has left the area temporarily uninhabitable. The damage is severe enough that rebuilding will take weeks, according to Stephen Spears, the city manager.

The town’s oil companies shut down to assess their damage on Sunday night but Spears did not know whether they had reopened yet, he said. The oil companies near Cushing store more than 65 million gallons of oil, more oil than any other city in the U.S. Its pipelines move more than a million gallons of oil per day and Bloomberg has called Cushing, “the pipeline capital of the world.”

“The majority of our oil facilities are outside the city limits,” Spears said. “They did shut down operations to do their assessment. I do not know if they started back up but they will only start back up if nothing is wrong.”

The majority of the ceiling tiles at the town’s public safety center fell, and there was a gas leak and multiple water leaks, according to town officials. The gas has been turned off.

The town is currently employing a structural engineer to determine whether there damage to downtown buildings pose a danger to residents; currently the area is blocked off. It was too early to say whether the buildings with the most damage would be salvageable.

“We want to assure the residents that we have everything under control,” Spears said….Continue reading

After the shaking from the 5.8 magnitude earthquake near Pawnee, Okla., subsided Sept. 3, Tandis Bidgoli noticed something unusual.

“I was very concerned,” said Bidgoli, a geologist with the Kansas Geological Survey, “because it didn’t appear there were any foreshocks to that event.”

In other large quakes, such as the 5.7 magnitude near Prague, Okla., in 2011, there had been other, smaller earthquakes before the big one. Scientists interpreted these earlier foreshocks as signs of a big one to follow.

But there were no foreshocks in Pawnee, Bidgoli said. The fault line was new. So she worried: What if the 5.8 quake, the largest recorded earthquake in the region ever, was itself just a foreshock? What if the biggest quake ever was just hinting at an even bigger quake to follow?

“Holy cow,” she said she thought. “If this is in Kansas, this is a game-changer for all of us.”….Continue reading

The largest recorded earthquake in Kansas history likely came from waste water injected into the ground by just one or two nearby wells, according to a new study by scientists at the U.S. Geological Survey.

One of those two wells, operated by SandRidge Energy, is still injecting water at the same level as when the earthquake occurred two years ago….Continue reading Lori Lawrence said she was standing in the hallway of her home near Central and Hillside on Wednesday night when the bedroom door started rattling. It was, she said, the sixth earthquake she’s felt in the past two years.

Friends filled up her Facebook feed with comments about the latest quake, which was actually two back-to-back quakes, the largest of which had a magnitude of 4.8.

It was intense enough that the city of Wichita, for the first time, sent out a team to examine whether any of its infrastructure had been affected by an earthquake. Reports had already been coming in about three water lines that had burst around the time of the quake. After a day of inspections, a few more potential cracks had turned up, including one at a wastewater treatment plant.

In the past two years, Lawrence has become one of the leading organizers for the Kansas chapter of the Sierra Club trying to document local damage from earthquakes. In November, the legal nonprofit Public Justice posted on behalf of the Sierra Club a notice of its intent to sue four of the largest fracking companies in Kansas and Oklahoma to prevent them from continuing to inject wastewater that many scientists say is probably causing the earthquakes.

But even as Lawrence and others are trying to document possible damage from low-level shaking, scientists are estimating the likelihood of a much larger earthquake in the area.

Between 2003 and 2012, there were three earthquakes in Kansas, but since then, there have been 579. This number doesn’t include more than 900 quakes in Oklahoma in 2015 alone, nor the 70 quakes in the first week of 2016. Oklahoma’s earthquakes have been creeping farther north, until in 2013 they reached the Kansas state line. In 2014, Kansas experienced the largest earthquake recorded originating within the state. But the two most intensely felt recent earthquakes in Wichita, in November 2015 and on Wednesday, originated in Oklahoma.

Because of the increase in the number and severity of earthquakes, the U.S. Geological Survey has had to change how it maps earthquake risks and devise new ways of measuring risk locally.

The new measurements suggest a potential for an earthquake much more severe than what most structures in southern Kansas have been built to withstand.

But the new predictive models may not be anywhere near as accurate as the ones along traditional seismic plates, according to Todd Halihan, a professor of geology at Oklahoma State University.

“The predictions kind of suck,” Halihan said. “We’re somewhere between a couple of liquor bottles falling off the shelf and complete Armageddon. And that’s not particularly comforting or useful, so you should probably take some steps to prepare people for what to do that is logical in a case of uncertainty.”…Continue reading

David Banks was preparing for bed a couple of weeks ago when his youngest daughter, 9, ran into the bedroom because she thought a stranger was breaking in.

Something was intruding into his Wichita home, but it wasn’t a person: Back-to-back 4.7 and 4.8 earthquakes had just struck Oklahoma near the Kansas border.

Banks’ wife took their daughter back to bed, but they continued to feel aftershocks.

The two quakes had convinced Banks that, after two years of Kansas quakes and several more in Oklahoma, it was time to look for earthquake insurance.

But when he looked, Banks said, he found that the deductibles were so high, often between 10 and 20 percent of the value of a home, that he thought it wasn’t worth it.

“If your home is valued at $200,000, you have to pay the first $20,000 before (an insurance company) pays a dime,” Banks said. “So what we’re going to do is wait until we get to some Richter scale fives and sixes to even worry about it at this point.”

Banks is one of many Kansans who have recently looked into or are buying earthquake insurance. Insurance companies collected more than $6.7 million in premiums in Kansas in 2014, more than a 40 percent increase since 2008, and local insurance representatives said the number of inquiries they’re receiving has only been increasing.

But although the insurance companies are collecting more money, few, if any, residents have been able to prove that the damage to their home was due to earthquakes, according to insurance industry representatives and local repair companies. And those homeowners who have proven earthquake damage frequently have not sustained enough damage to cover the large deductibles….Continue reading

SandRidge Energy Inc., the largest oil producer in Kansas and largest disposer of waste water in Oklahoma, is refusing to abide by regulations designed to prevent earthquakes, according to the Oklahoma Corporation Commission.

Oklahoma has seen a massive increase in the number of earthquakes since 2009, as the amount of waste water injected into the earth has increased. The earthquakes have increasingly originated close to the Kansas state line, and in Harper and Sumner counties.

The two most intense recent earthquakes felt in Wichita, including the earthquake last week in Fairview, originated in Oklahoma near where SandRidge operates waste wells.

SandRidge would be the first of more than 100 fracking companies in Oklahoma to refuse to implement the commission’s recommendations. One other smaller company resisted its recommendations in August but quickly complied after meeting with lawyers, according to commission spokesman Matt Skinner.

“A lot of the plans that we issue are technically voluntary,” Skinner said. “But it’s always been done with the understanding that if you don’t we’ll go to court.”…continue reading 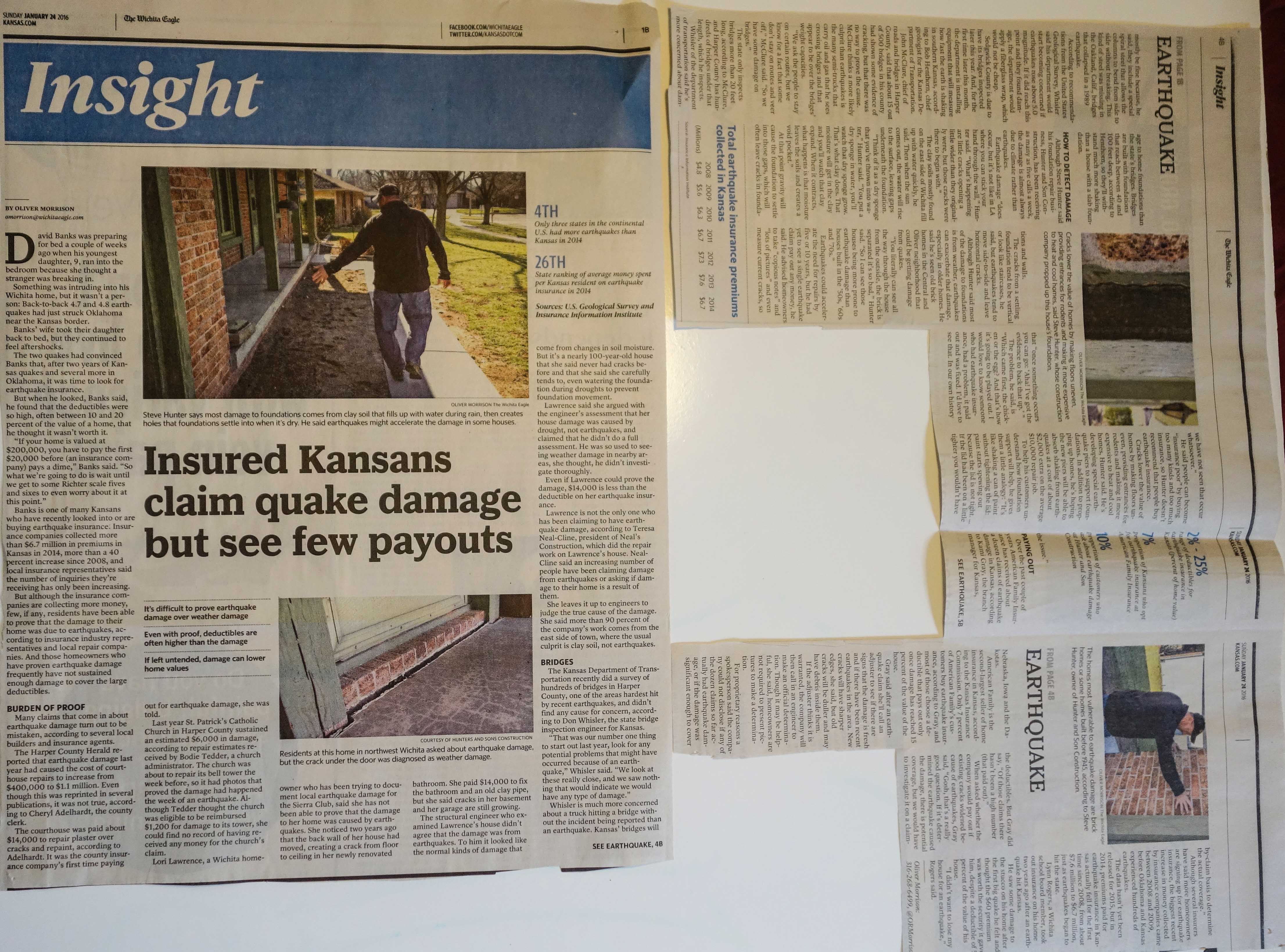 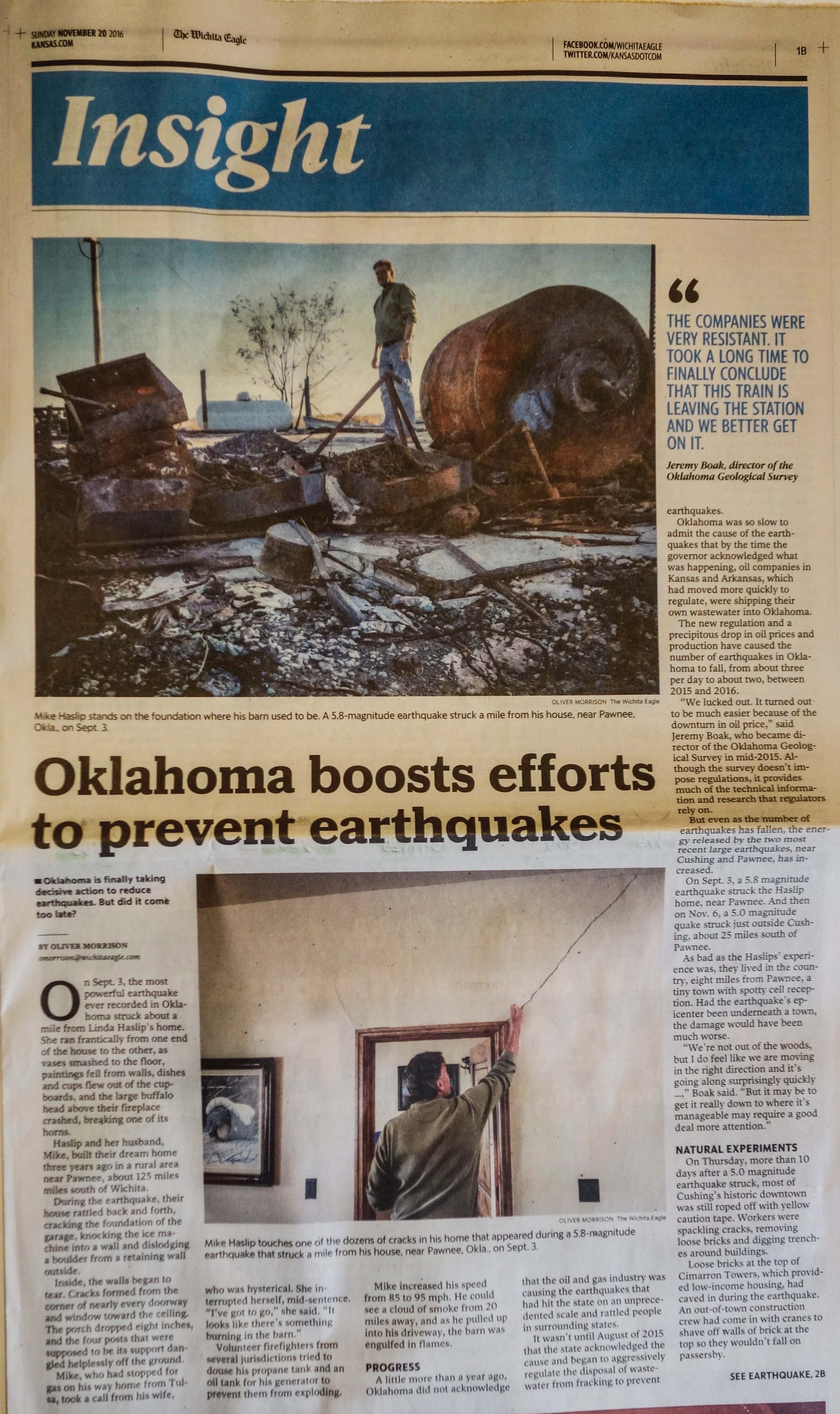 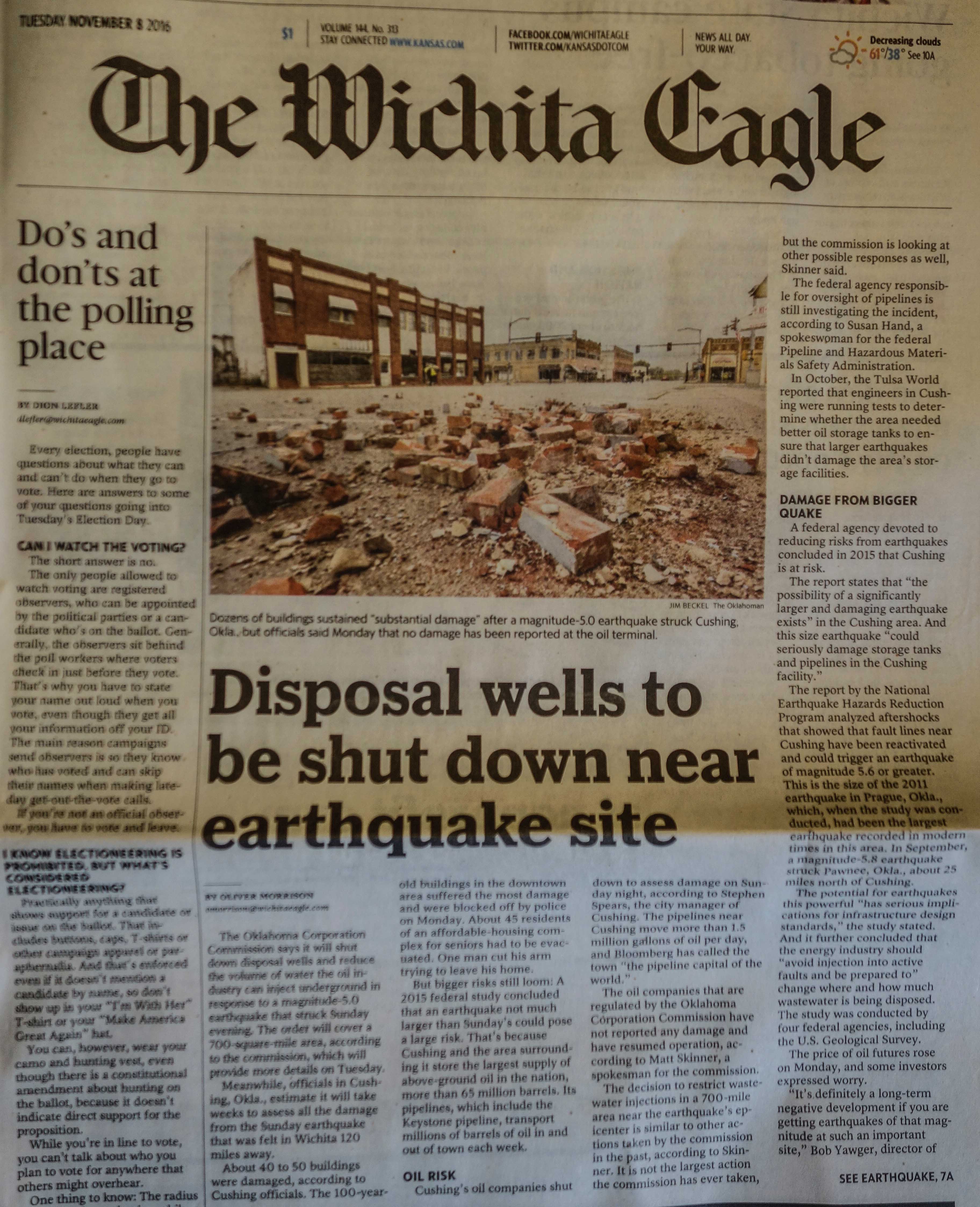 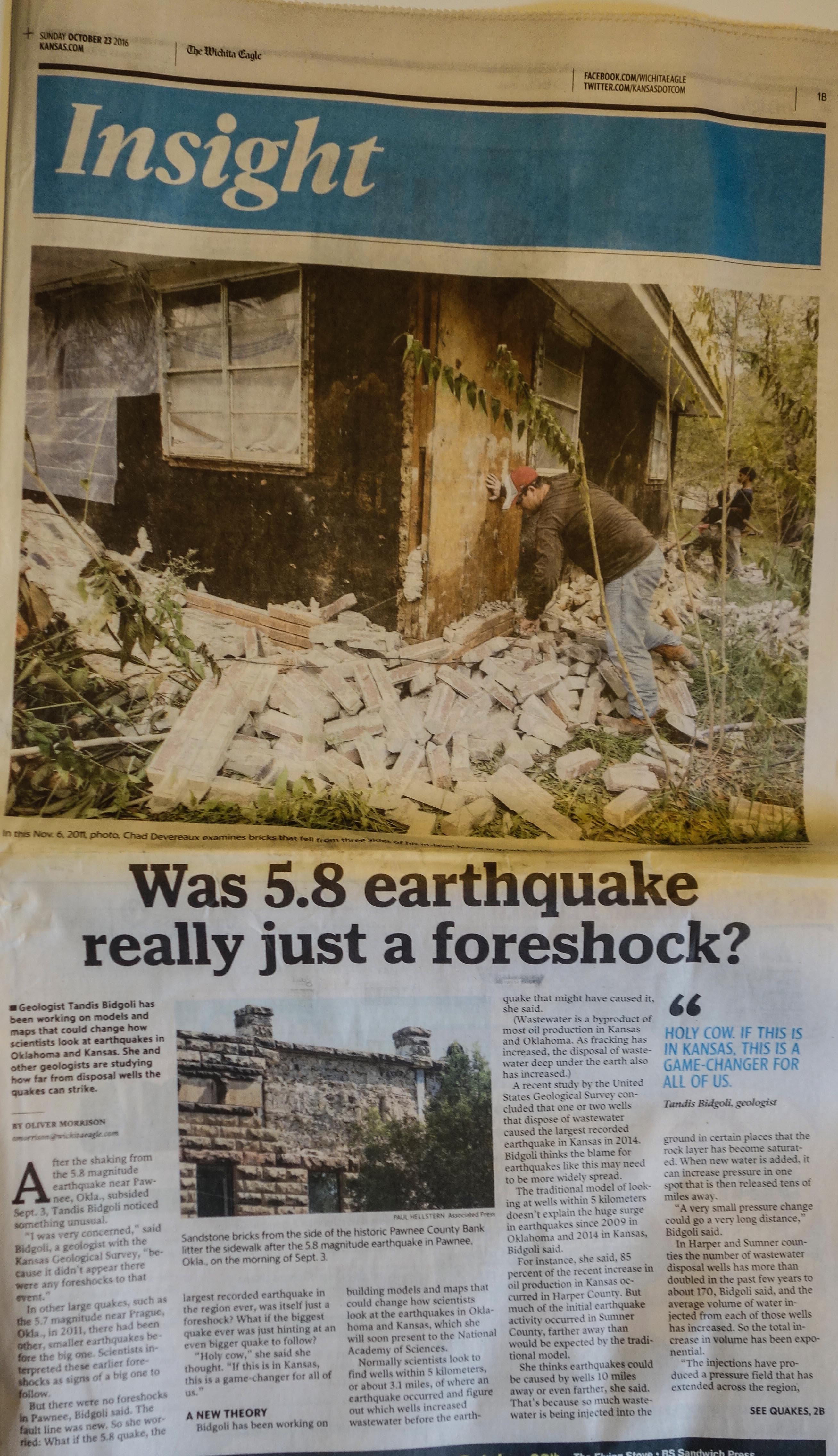 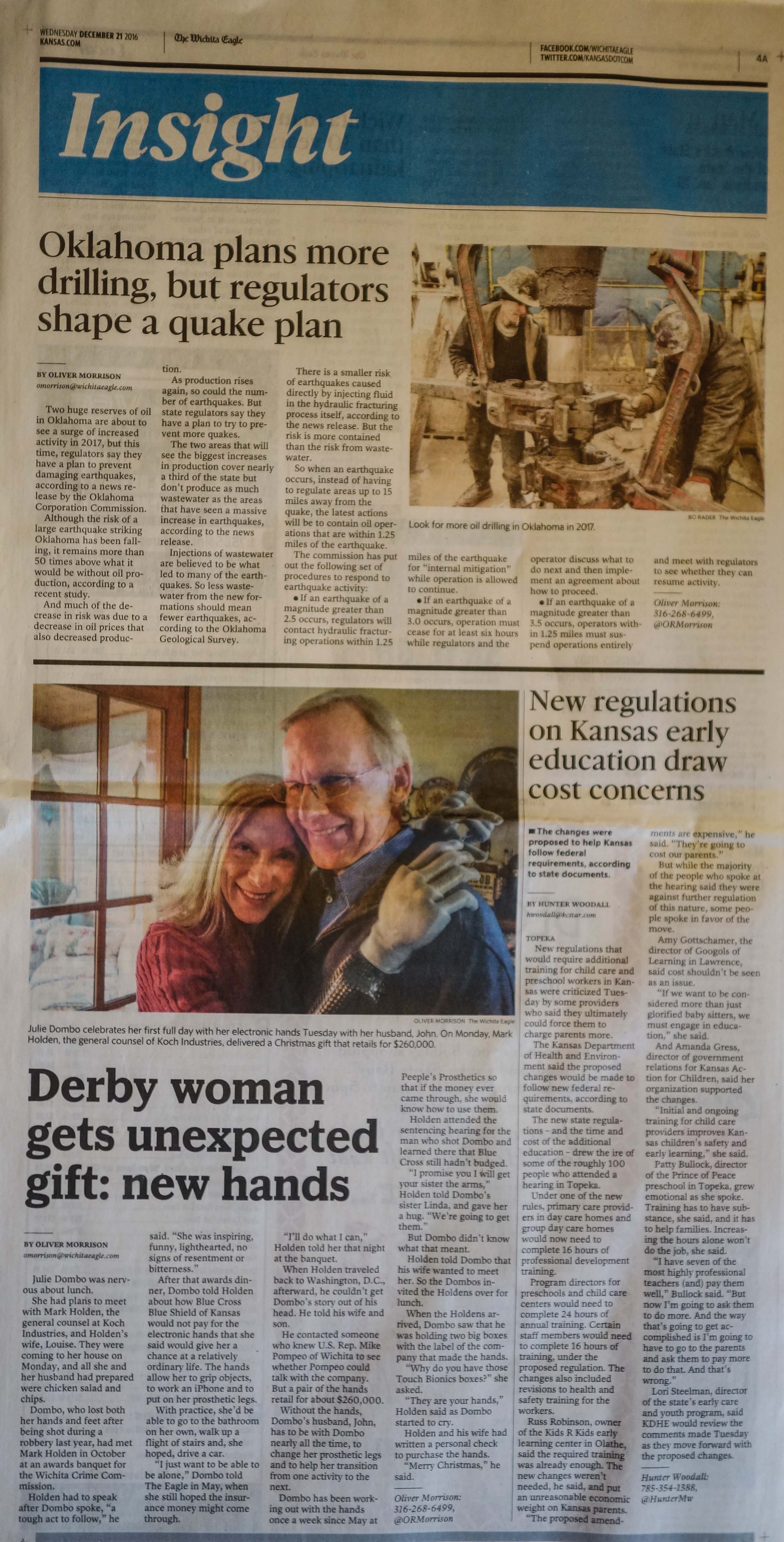 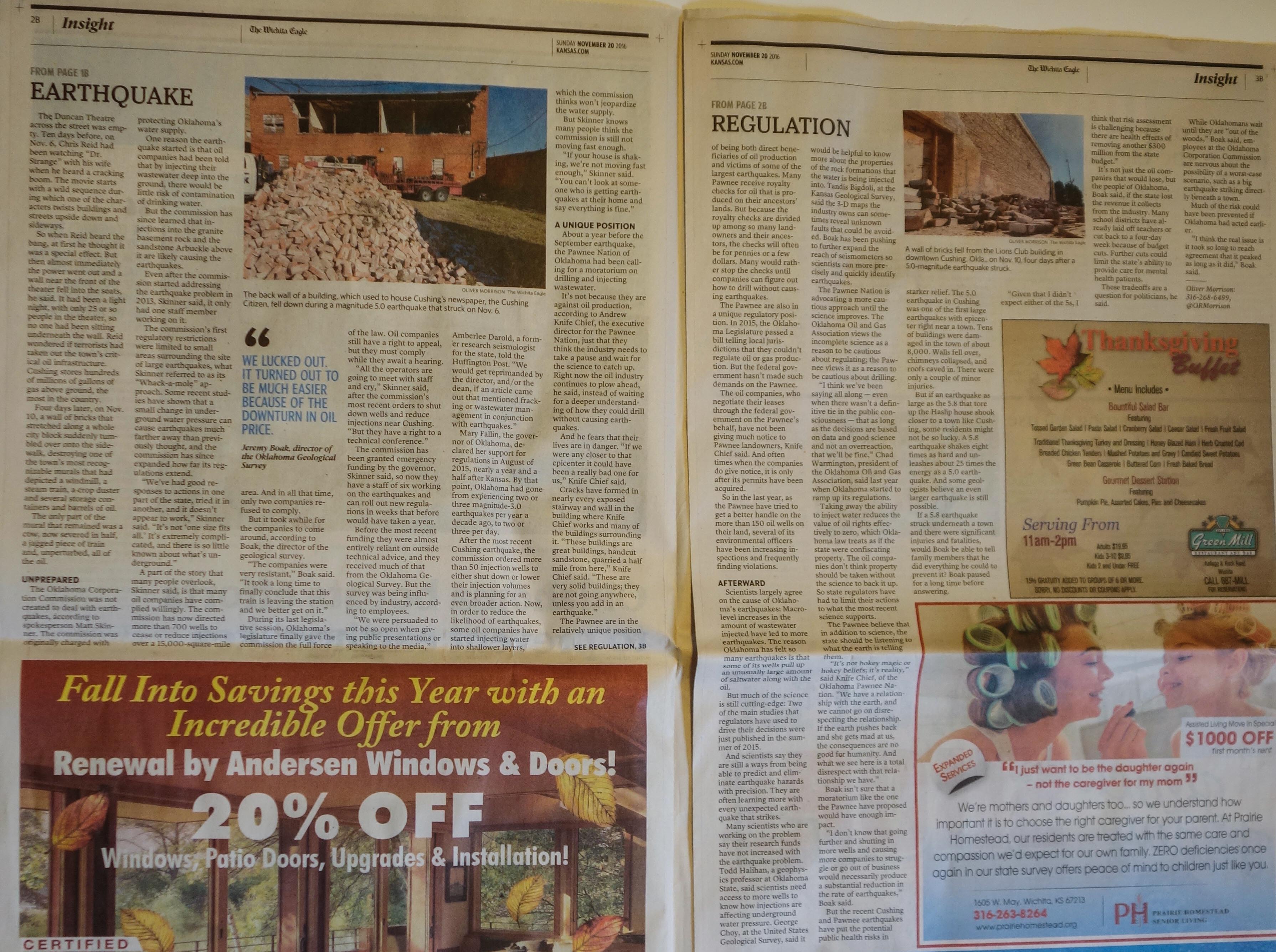 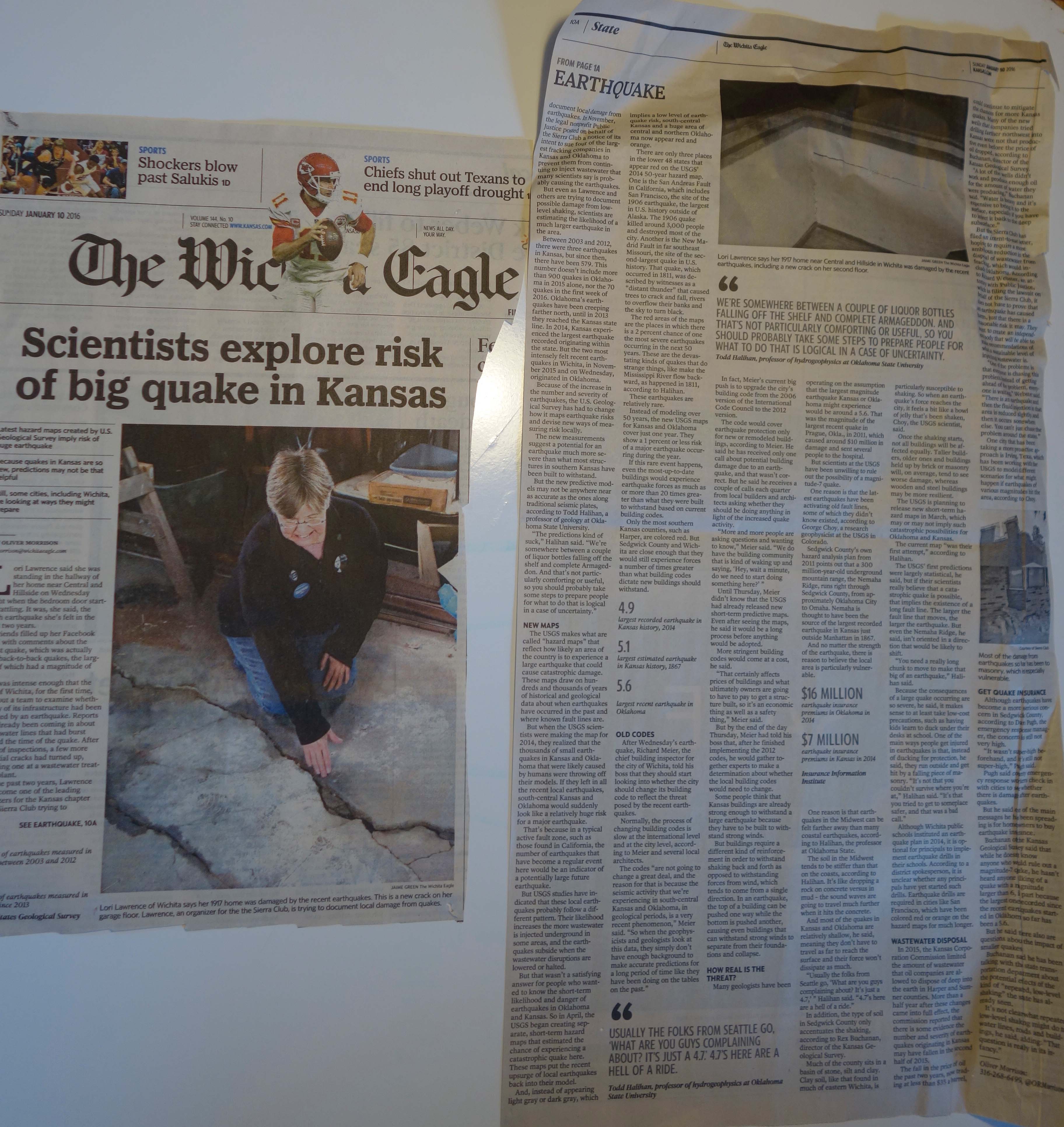