In early July, the anger and pain, especially in Wichita’s black community, was rising.

On consecutive days, two new videos of black men killed by police had spread quickly on social media. Alton Sterling appeared to be restrained and helpless on the ground when he was shot in Baton Rouge, La. In Minnesota, Philando Castile’s girlfriend said in a live video that Castile had followed all the rules for how to act during a traffic stop before he was shot.

In Wichita, Djuan Wash had, once again, helped organize a rally in Old Town, to air grievances and demand change. There was a microphone, a crowd holding signs, a couple of politicians and TV cameras.

Wash and a few other activists had organized about 10 similar rallies about police violence and racial profiling since 2013.

Among those attending were Rob Nice, 37, and Caleb Mitchell, 24, black barbers at Twice As Nice barber shop about two miles north of Old Town. They had never been to any of the rallies. Nice decided to go after seeing Alton Sterling’s son, Cameron, break down in tears on TV.

“Everyone was upset. I was upset,” Nice said. “That kind of hurt. Especially when you lost your father, like.”

Nice listened to Wash but wasn’t satisfied. He interrupted. “We’re done talking,” Nice yelled. “There is no more time to be talking.”

“We want our policymakers to do something about this now,” Wash shouted. “… But guess what: If you are not at the table, then you are on the menu.”

A new civil rights movement is underway in Wichita – and the nation – ignited first by the 2013 shooting of Trayvon Martin and fed by the tense protests in Ferguson, Mo., following a police shooting there, two years ago. With every video of a police shooting, the Black Lives Matter protests grow, sometimes turning volatile.

Locally, young black leaders such as Wash and A.J. Bohannon are taking an approach that is both bold and conciliatory, including public displays of resistance and private negotiations with public leaders for change. Their challenge has been to demand change while keeping the protests peaceful and the black community united.

In the 10 days after the Old Town rally, Wichita saw one of the largest and potentially most volatile protests it had seen in years, followed by one of the city’s most public displays of mutual support.

Police Chief Gordon Ramsay, who organized a cookout for the protesters, was hailed for his “flip the script” approach and even received an invitation to the White House. But the media gave less attention to leaders such as Wash and Bohannon, who persuaded protesters to give the cookout a chance….Continue reading

The following story about the community/police barbecue was picked up nationally by a number of publications.

As much of the nation was reeling from yet another act of violence in Baton Rouge, La., hundreds of Wichitans came out to a barbecue at McAdams Park with Wichita police officers.

Earlier in the week, protesters had planned to march on Sunday, but after organizers met with Police Chief Gordon Ramsay for hours, according to the protesters, they agreed to break bread together instead.

The idea was to open up lines of communication and build trust, from the perspective of the police, and for the protesters. While the march last week was largely young and black, the crowd at the barbecue drew whites, blacks and Hispanics in larger numbers and included more older people and children.

At one table, three men – a black man, a Hispanic man and a white man – sat down with burgers next to Lt. Travis Rakestraw to share their ideas.

It was the first time since 1992 that Jarvis Scott, the black man, said he’d sat down with a police officer, and the other two said it was their first time ever sitting down with an officer…..continue reading

BY LARA KORTE AND OLIVER MORRISON
The Wichita Eagle

Nearly 200 people took to the Wichita streets on Tuesday night to protest police violence and support the Black Lives Matter movement, echoing the protests and activism that have erupted across the country over the past week.

At around 7:30 p.m., protesters began gathering near the Barry Sanders Football Field at 13th Street and Ohio. Many carried signs with messages such as “no justice, no peace, no racist police” and “black lives matters.” They carried pictures of loved ones who they said had been killed by police. The names of deceased cousins, nephews, brothers and husbands were shouted along with calls for justice.

Valerie Mason was one of the protesters. Mason said she has had her own experiences with police brutality that she is concerned for the future of the black community.

“It’s almost like being on the verge of extinction, like animals,” Mason said. “It’s sad that one race that is continually being brutalized by the police and brought down in this world, and it shouldn’t be like that.”…. Continue reading

“How former basketball star Juston White claimed his heritage and grew up”
July 6, 2016

In the 1990s, Juston White grew up in a modest duplex near Hydraulic and Douglas. It wasn’t in the best part of Wichita, but it wasn’t in the worst either. There were a lot of gangs back then, he said, so he had to be careful about the colors he wore and the people he walked with.

His mom kept a sharp eye on him then, so that he didn’t get mixed up with the wrong people. And White was, by temperament, soft spoken, likable, almost shy, his friends thought.

Even then, his friends said they saw an inkling of the pride and excellence that would eventually lead White to become one of the best high school basketball players in the state and return, now at 35, as the chief professional officer of the Boys & Girls Clubs of South Central Kansas.

White loved soccer. He carried his cleats to school and would tell his dad, when he got home, about the soccer games he played at recess. But when he was 9 years old White came home and told his dad that he’d played basketball that day. His dad, who had played basketball himself, beamed a smile so wide that White would never forget it.

Soon after, his dad, according to what White was been told, died from complications of a head injury he’d received from two officers in a jail cell.

At the funeral in Mississippi, White remembers how lifeless his mom was and how small he felt. He felt helpless, like there was nothing he could do to comfort his mom or make the situation better.

He vowed to do the one thing he could do: not cause trouble for her. He would get good grades, stay out of mischief and “do the right thing.”

“I didn’t want her to have to worry about me and my future,” White said….Continue reading After Michael Brown was shot by a police officer in Ferguson, Mo., last August, peaceful protests and riots overtook the streets. The police fired tear gas and, in sometimes heavy military gear, clashed with protesters in scenes that harked back to the civil rights era.

The Rev. Junius Dotson, pastor at St. Mark United Methodist – the largest black church in Wichita – knew he had to respond. Dotson describes himself as a “prophetic preacher.” It’s a phrase that means the words of Jesus are not just an outfit to be worn on Sunday but a call to justice.

“We’re supposed to be the light of the world, the voice for the voiceless and speak on behalf of the oppressed and those that were denied justice,” Dotson said.

But even though he believes pastors should be politically active, it wasn’t something he’d had a lot of practice at, especially in a situation so tense. So he did what pastors do – he prayed.

Soon, his call was answered.

The Rev. Kevass Harding of Dellrose United Methodist Church phoned Dotson from Arizona after watching CNN and thinking, “We cannot let this happen in our city.”

Harding and Dotson are two of several black pastors in Wichita who have taken on a more prominent role in the city as racial issues have risen to the forefront of national and local attention.

The pastors have held rallies and lobbied city officials to change their policies, particularly in the police department. The city recently adopted body cameras for all of its police in a political effort that was driven by black pastors.

But their efforts have not been without criticism. Some black community members think their churches have fallen short of the key political role they played during the civil rights era, while other pastors want churches to stay out of politics and stick to preaching the gospel.

And a few pastors, such as Dotson, are taking on the biggest challenge of all – bringing an end to the segregation that, they say, is greater on Sundays than on any other day of the week….Continue reading After hours of standing, the 26-year-old needed to rest his legs. But the crowd was so packed together he couldn’t even turn. So the man behind Myles grabbed his arms and eased him to the ground.

Robert Weems, now a professor at Wichita State, was in awe of the vast number of people and the calm. “That day just went so peaceful it was almost eerie just how peaceful it was,” Weems recalled.

The Million Man March inspired these and other Wichitans who watched to become more engaged in Wichita’s black community. The focus in 1995 was introspective: what each man could do to better himself and the community he lived in.

But many participants felt bitter about the racial bias they saw in how the event was covered by media.

Now, 20 years later, organizers and participants in the 20th anniversary celebration say the black community cannot achieve justice on its own, and that what is needed involves mending attitudes and institutions, such as the system of law enforcement. So its leaders are trying to make the anniversary both more strident and inclusive: The theme 20 years later is not a personal “day of atonement,” as the original was sometimes called, but “Justice or else!”….Continue reading

During the 45th reunion of the East High School class of 1967, a group of classmates looked around and noticed that very few of their black classmates had showed up. This had been true for nearly all the reunions, they realized, despite being the largest school in the state then and being 22 percent black.

A group of white alumni vowed to change that for the 50th reunion, which is happening this weekend. They approached the Kansas African American Museum to see what they might do to bring out more of their black classmates.

As they reached out, they found that many of their black classmates had traumatic and not entirely positive memories from 1967. That was the year that a riot broke out after school when no black cheerleaders had been selected, despite a team led by many black football players….Continue reading 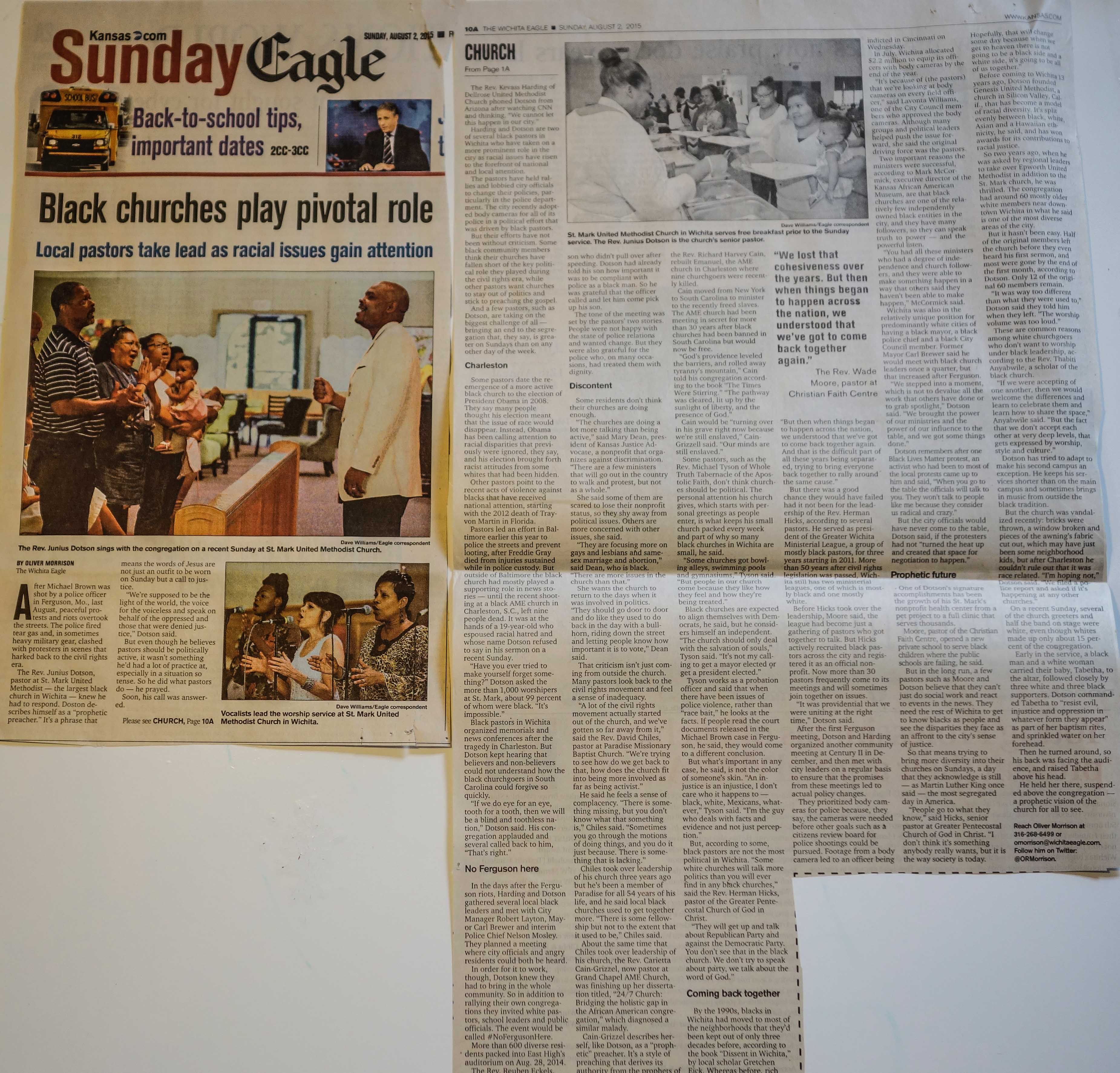 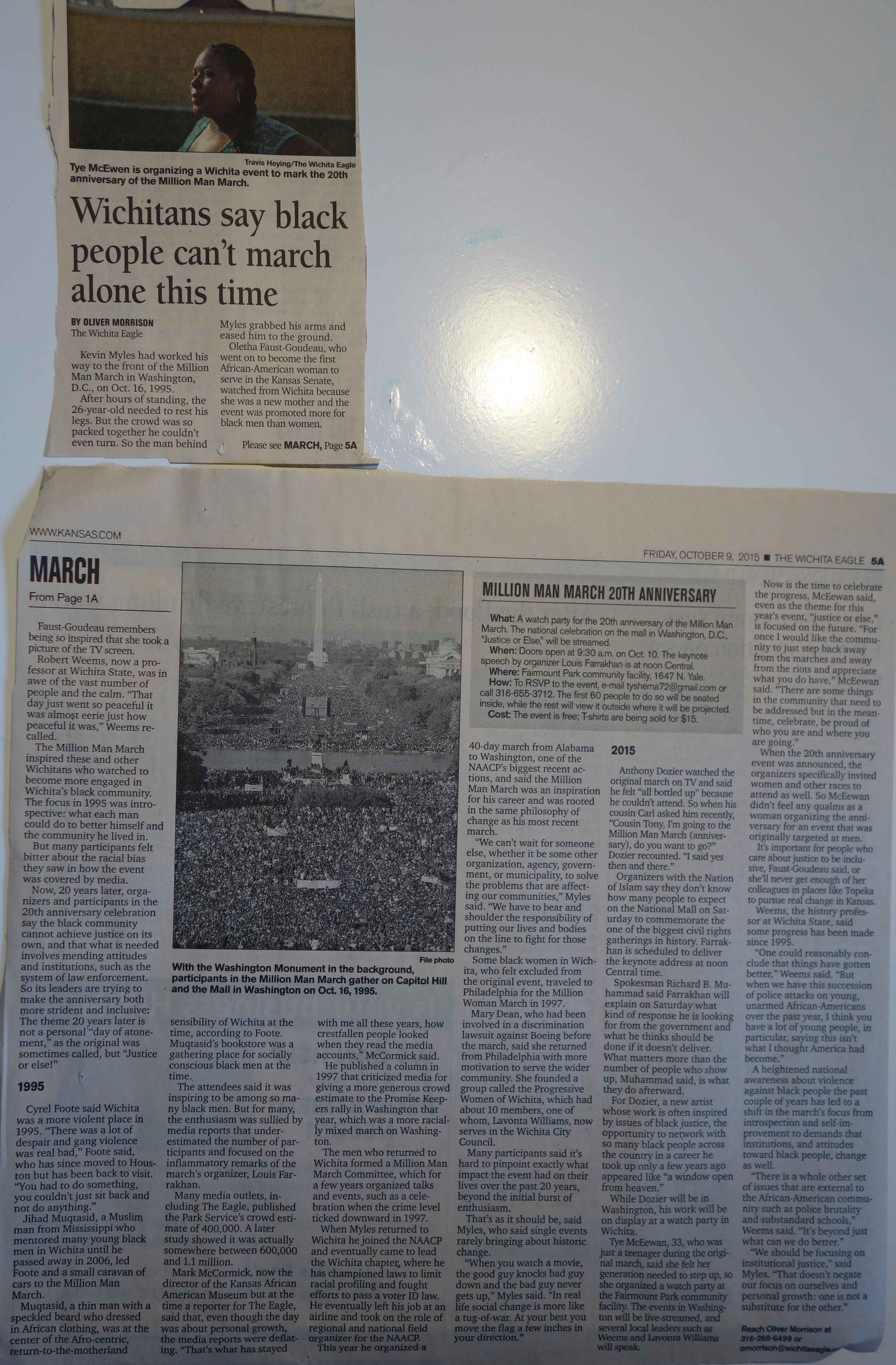