NEWS FEATURE: Winds of Waco are Blowing in Wichita This feature article about Kansas’ biker response to recent violence, which was my first for the Wichita Eagle during my first week at the paper, was one of the most read articles on Kansas.com for the month of May in 2015.

Just after closing time at Mid America Powersports on Thursday, a black and chrome Harley-Davidson rumbled into the parking lot. The driver removed his bandana and gloves, revealing several heavy rings. As the driver lifted his black boots over the saddle, a small bullet casing hung from a zipper on his jacket and a ponytail tied with two separate bands swung against his shoulder.

He and his wife on back were the first to arrive, which he thought was curious since he had to travel the farthest. As he waited for the others, he talked about why he had come.

“Back in 1975 a small-town Baptist preacher ended up in a motorcycle rally,” he said, introducing himself and his wife as Carl and Marsha Owen, in a gentle, grandfatherly voice underneath a white beard. “He started praying to God and said, ‘You’ve got to send somebody to these people and share the gospel with them.’ Well, God sent him. And that’s what we do.”

The Christian Motorcyclists Association patch on his leather jacket read, simply, “The Son.”

“We go to these rallies, wherever motorcyclists are,” Owen said. “Sometimes we use words. Most of the time we just serve.”

This impromptu meeting of several prominent Wichita biker groups had been arranged by Sis Bohrer, public relations officer of the local chapter of ABATE (A Brotherhood Against Totalitarian Enactments), the main political organization of motorcyclists in Kansas. The only rule of the meeting was that the bikers would not talk about the very event that gave rise to the meeting: the deaths of nine bikers in a shootout in Waco, Texas, four days before.

They were tired of all the negativity that was coming out about bikers after the deaths in Waco and wanted to set the record straight: Bikers in Wichita are upstanding, wholesome community members who just happen to love to ride, they said. They’re more likely to be found delivering toys to children than getting into a violent altercation. But some motorcyclists are afraid the government will use this tragedy as an excuse to erode the rights of bikers….. Read more 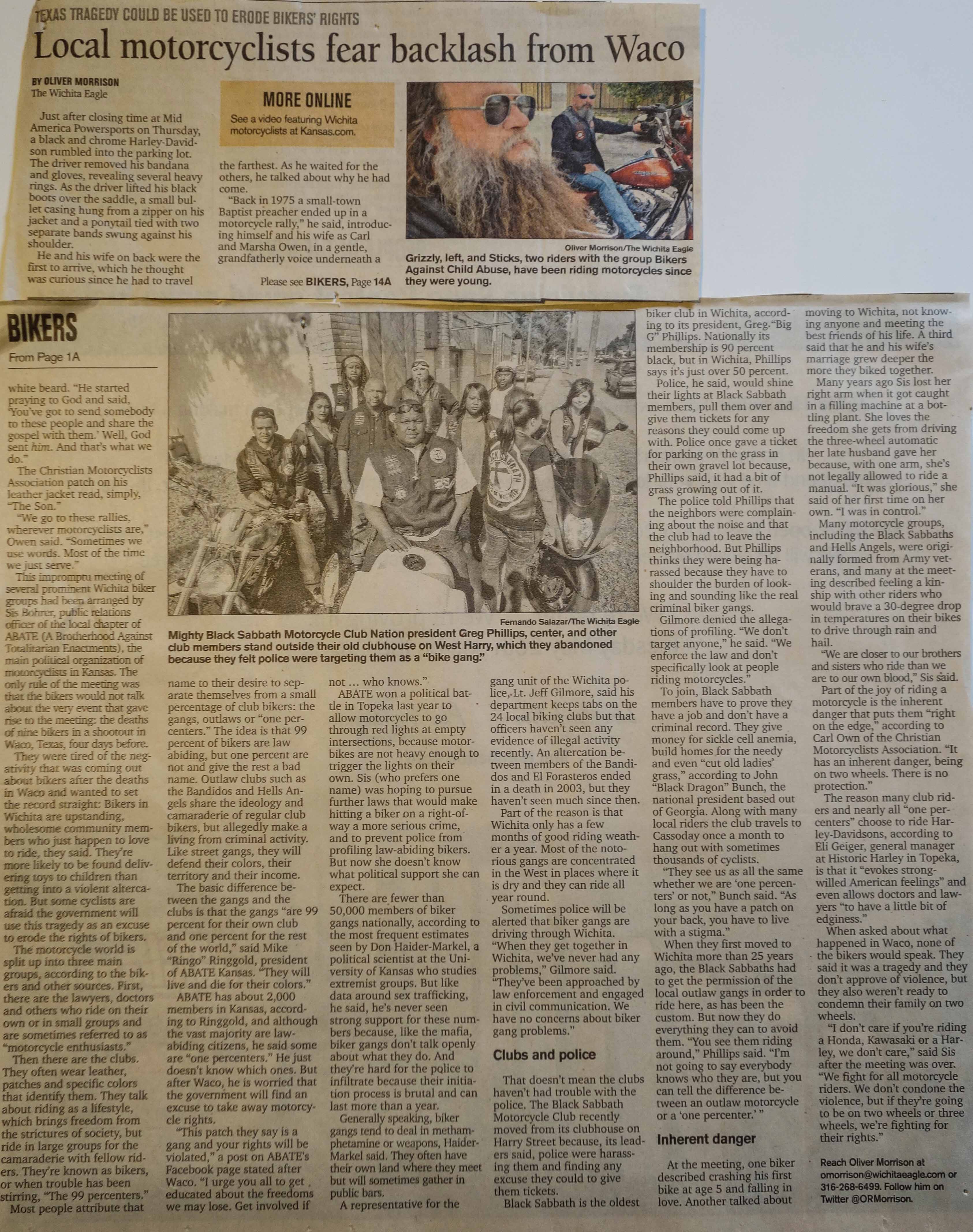