NEWS FEATURE: Wichita mother tries to survive on the minimum September 5, 2015
“Life on the minimum wage: One Wichita woman’s story”

Mychelle Staley came home from volleyball tryouts Wednesday and asked her mom for 50 cents. She wanted to buy a bag of hot fries the next day.

That reminded her brother, Daviaun Gary, 11, that he needed $15 to pay for an instrument in music class at Curtis Middle School in Wichita, which they both attend.

This was no surprise. Staley’s three children know that if a new movie is coming out, their mom will probably tell them to wait until it’s out on DVD.

That’s because, even after working full time for seven years at the East YMCA preschool, she only earns $8.26 an hour. That works out to about $1,000 per month after taxes; $850 of that goes to rent, utilities, a family phone plan and gas.

So Staley has to stretch the remaining $150 to buy soap and toilet paper, clothes and school supplies, not to mention the $210 for Daviaun’s soccer team, or the $350 to find out what is wrong with the broken-down Chevy that’s been sitting in her driveway the last four months.

Even though Staley makes slightly more than the minimum wage of $7.25, she and many others like her live in poverty. President Obama has proposed raising the federal minimum to $10.10, which the Congressional Budget Office projected would increase the salaries of more than 16 million Americans.

While many are high school students or adults starting out in their careers, more than half are over 25, and nearly a third work more than 35 hours a week.

The problem is even more acute in Kansas: 20 percent more Kansans earn at or below the minimum wage than the nation as a whole. An estimated 40,000 Kansans in 2014, two-thirds of whom were women, earned the minimum or below.

But Rep. Jim Ward, D-Wichita, has not been able to get his most recent minimum wage proposals up for a discussion in Kansas, he said.

It’s not just liberal politicians who are concerned. The nation’s top bankers at the Federal Reserve have further delayed raising interest rates in large part because, even as unemployment has fallen to its lowest level in seven years, wages have not kept pace.

A report Wednesday by the National Employment Law Project shows that while wages for all workers have stagnated the past five years, low-wage workers have been hit the hardest. And the number of low-wage workers will continue to grow, according to the report: Half of the occupations projected to add the greatest number of jobs by 2022 are in the lowest-paying sectors.

Some cities such as St. Louis have started passing their own minimum wage laws. Incremental increases of the minimum wage are not new, although the recent municipal ones are historically generous. The $11 wage that St. Louis passed Aug. 28, after inflation, is higher than the federal minimum wage’s high point of around $10 in 1968.

In the past year a handful of cities, such as Seattle, San Francisco and Los Angeles, have raised their minimums to $15 an hour, an increase that is redefining what is an acceptable level of poverty for those who work, even as the overall economic impact of these unprecedentedly large increases remains unclear.

For now, Staley says she has to depend on the support of family members, neighbors, coaches and government programs to be able to feed her kids.

Staley’s uncle drove by with a wrinkled dollar bill that he handed to her as she walked her kids home from the park. For tomorrow, at least, Mychelle, 13, would be able to buy a bag of chips at school….Continue reading 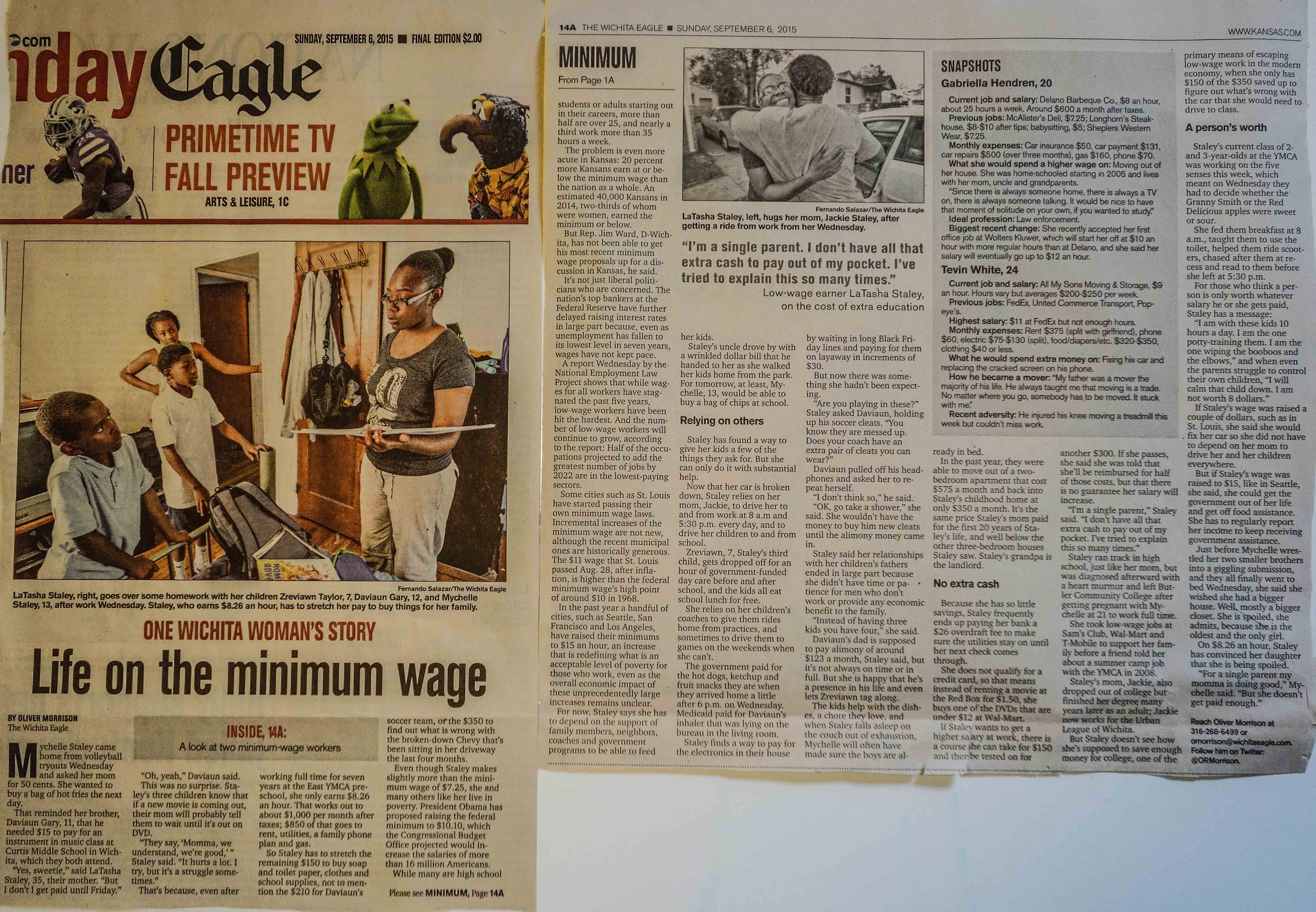 Read the article in its entirety