February 15, 2017 “Brandon Steven tried to bring Vegas to Kansas but ended up suing”

In 2015, Steven and his brother Rodney led a group of 18 Wichita-area investors in a proposal to build the fourth and final casino in Kansas, called Castle Rock.

The drawing for the four-star casino hotel, designed by a Las Vegas architect, showed it rising 20 stories, with a metallic sheet reflecting the endless flat Kansas horizon. The other two casino proposals were much smaller, rising only a few stories, looking more like large shopping mall districts than major casino destinations.

Everything about the Castle Rock proposal was twice as large as the others: It was estimated it would earn revenue of around $90 million per year on twice the number of slot machines and twice the number of tables, whereas the other bids were estimated to earn roughly half that amount. Castle Rock would include 65,000 square feet, and the other two half that. It would employ more than 800 workers, and the other proposals fewer than half as many. And it would cost $140 million to build, the other two roughly half that….Continue reading

February 15, 2017 “How Brandon Steven developed an obsession for high-stakes poker”

Brandon Steven was playing high-stakes poker against Beverly Lange, a Texas woman at the televised World Series of Poker in 2013, when she decided to go all in with $435,000 in chips.

“Would it surprise you if I had a king?” Steven asked her. Steven was telling her that he had kings, which would beat the jacks in her hand. Or he could be bluffing.

“It wouldn’t surprise you at all,” he said, taken aback by her response. “What do you do in Austin?”

“Really,” Steven said, and then, as if trying to see if she was on his level. “You play a lot of poker?”

Steven started mumbling aloud the possible hands she could have. She couldn’t have an ace, could she?

“I’m really not that good of a poker player,” Lange said. “Don’t try to figure out, you know, what I should’ve done, because what you would expect me to do is probably not something I would do. Does that help you?”

Steven laughed: either she had made a mistake, or Steven was being played. “It helps me; it helps me. I know I have the worst hand, and I’m probably still going to call,” Steven said.

“If you have the worst hand, I definitely want you to call,” Lange said.

But seconds later, Steven folded with the kings that would’ve won. “A dagger to the heart of Brandon Steven,” the TV commentator said. Although Steven lost, the hand showed how savvy he had become at high-stakes poker….Continue reading 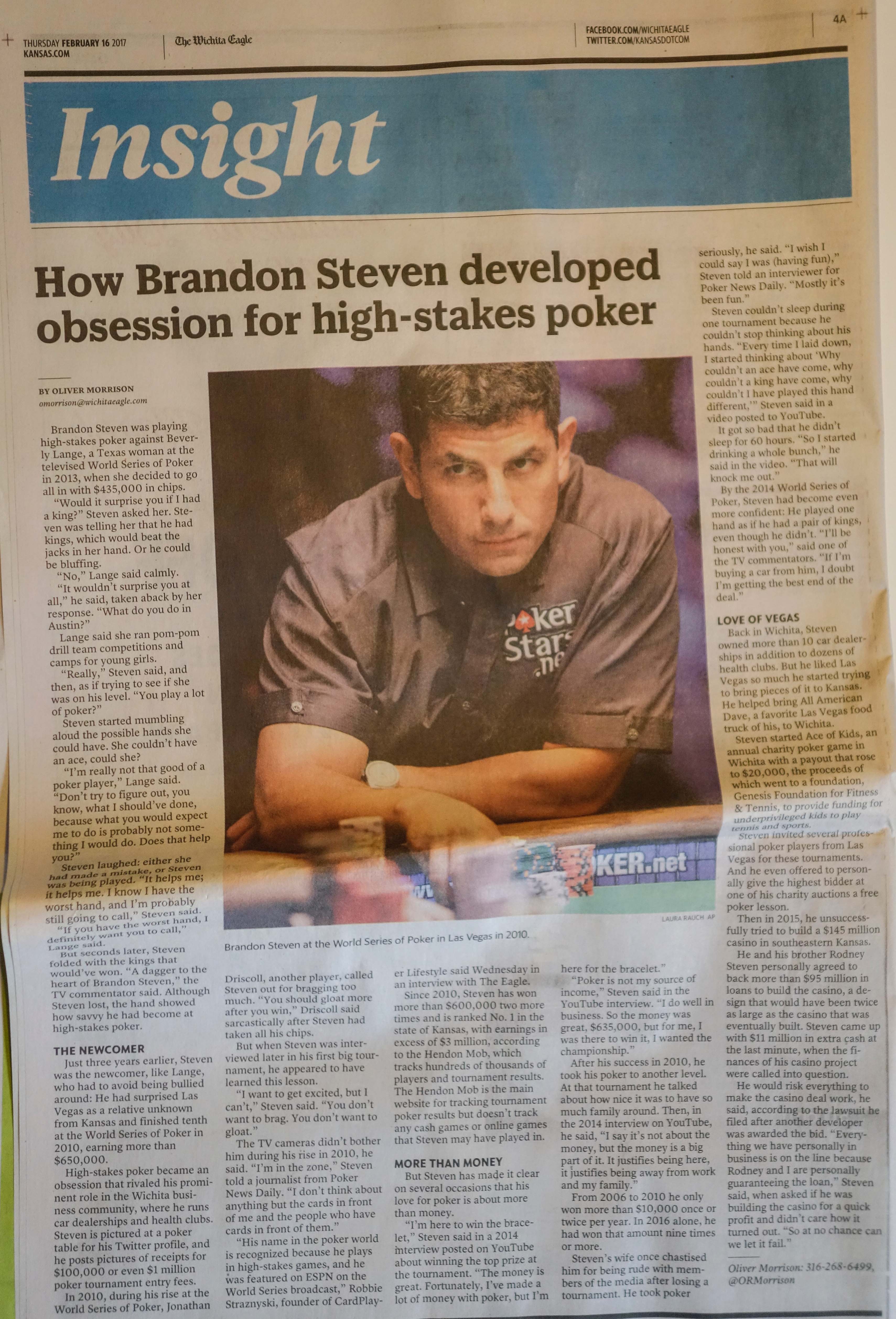 “The comprehensive timeline for Wichita’s Joyland”

In May, Wichita proposed spending $1.5 million to renovate Naftzger Memorial Park, in downtown Wichita, near Intrust Bank Arena. The initial plan would replace the park’s grass with artificial turf and provide space for live music and other events.

Chase Billingham is excited but skeptical.

Billingham, a sociologist at Wichita State University, coincidentally published a study only a week before, in the academic journal City and Community, about how Wichita has tried for more than 50 years to change the park’s reputation by pushing out the poor and the homeless. And mostly has failed…..Continue reading

“One homeless person’s view: Ban drugs, booze from park”
On a recent afternoon Mark Roland, 60, took small pieces of white bread, rubbed it between his fingers into a ball and tossed it toward the pond in Naftzger Park downtown, as he does on most days, sometimes multiple times, and watches the pieces get snatched up by sparrows, starlings, blackbirds and once in awhile, a robin, turtledove or duck.

“It’s a peaceful way to get away from events, relax,” he said.

Roland didn’t know about the city’s latest $1.5 million plan to renovate the park in the leadup to the NCAA tournament in 2018 or the city’s nearly 50-year history of unsuccessfully trying to discourage men like him from spending so much time in the area.

Roland moved to Wichita seven or eight years ago, to get away from family problems in Nebraska. He sleeps in the back of a Chevy Blazer five blocks away on Second, which the owner has given him permission to stay in for the time being, where he locks up his clothes and toiletries. He used to stay at the mission but didn’t like all the rules.

He came to the park for the first time soon after arriving in Wichita on a weekend when a church group cooked hamburgers, hotdogs and barbecue, a frequent occurrence when it’s warm out, he said. These lunches are probably the park’s busiest time, he said. He gets food stamps too and will occasionally eat at the Lord’s Diner, but he said the park lunches are really good.

As he threw crumbs, a few city workers in yellow vests sprayed weeds, pinched litter off the ground and emptied garbage cans. The grass had just been mowed, so that some of the clippings had further clouded up the park pond into an even darker green and brown, but the birds chirped loud and happy.

Nobody from the city ever asked him what he’d like to see in a renovated park, he said even though he’s one of its most frequent users….Continue reading