The decision is expected to come at 9 a.m. on one of three days: Thursday, Friday or Monday.

Evan Shaheen, president of Wichita Pride, has worked toward this moment for more than a decade, he said, first fighting a constitutional amendment that banned gay marriage in Kansas in 2005.

If the court rules in favor of a federal right to marriage equality, he and other same-sex marriage supporters will head to Old Town at 5:30 p.m. “Of course there will be celebrating, a sigh of relief, basically a party,” Shaheen said. “Because everything that we’ve worked for has culminated in this moment.”

They will also head there if the court’s decision allows states to ban gay marriage. “If they rule against us, it becomes a protest,” Shaheen said. “To show even though this happened, we’re not going anywhere.”…Continue reading

Gay couples in Wichita and across the nation celebrated, and some states issued marriage licenses for the first time.

“We are ecstatic that everyone will finally have the right to marry the person that they love and that equality will prevail, not only in Kansas but in the U.S,” said Kerry Wilks of Wichita, who had been suing Kansas for the right to marry.

Others saw the historic 5-4 decision as an assault on traditional heterosexual marriage and decried it as an improper infringement on state and voter rights, and on their religious beliefs.

“It took the runaway courts to impose something upon us that we did not want,” said Terry Fox, a minister at Summit Church and a leading proponent of the state’s 2005 voter-approved ban on gay marriage, which is now void.

Both sides looked beyond the ruling, with one calling for anti-discrimination laws for gay people and the other seeking laws to protect the religious views of those who see gay marriage as sinful….Continue reading

Friday was a bittersweet day for Bill Dunn.

He tried for 20 years to legally marry his partner, Shaun-Michael Morse. Although he was ecstatic to see the day come, when same-sex marriage was ruled constitutional, it came five years too late for him.

Now he and Morse face an extra burden in their separation that they would not have to face if they had been allowed to get married.

They met in 1990 at the First Metropolitan Community Church in Wichita, when Morse was singing for World AIDS Day….Continue reading

“Nancy and Janice can get married now, but don’t expect a huge party”
BY OLIVER MORRISON
The Wichita Eagle

Nancy Zavala and Janice Mowat want you to know that they’re really ordinary: fun but frequently a little boring.

They’ll probably get married pretty soon, now that the legal limbo of gay couples in Kansas has been removed by Friday’s Supreme Court ruling. But they’re in no rush.

They’re not activists, they say, so it wasn’t really worth it to them to deal with the hassles of getting married in Kansas before it was fully recognized.

“We’re not out pounding the pavement,” Zavala said.

“We don’t want to be shoving it down anybody’s throat,” Mowat said. “I don’t want other philosophies or feelings shoved down my throat either.”…Continue reading

Lisa and Natalie Tos-Brightup met at a Pine Valley Christian Church social in 2006. Lisa was impressed with Natalie’s quick wit during word puzzles.

“She kept grabbing my pieces and using them to complete the puzzle much faster than I was completing it by myself,” Lisa said.

Natalie had recently pulled herself away from a marriage and was living in a new place with her two boys. She told Lisa that she didn’t have enough chairs for them to sit and eat dinner together.

So Lisa bought some folding chairs and took them over. Natalie didn’t realize they were a gift and thought Lisa was just being nice and loaning her the chairs. It was raining outside and, as they sat together in Natalie’s new, emptier house, Lisa took Natalie’s hand for the first time, looked at her and asked, “Do you think there could be something here?”….Continue reading 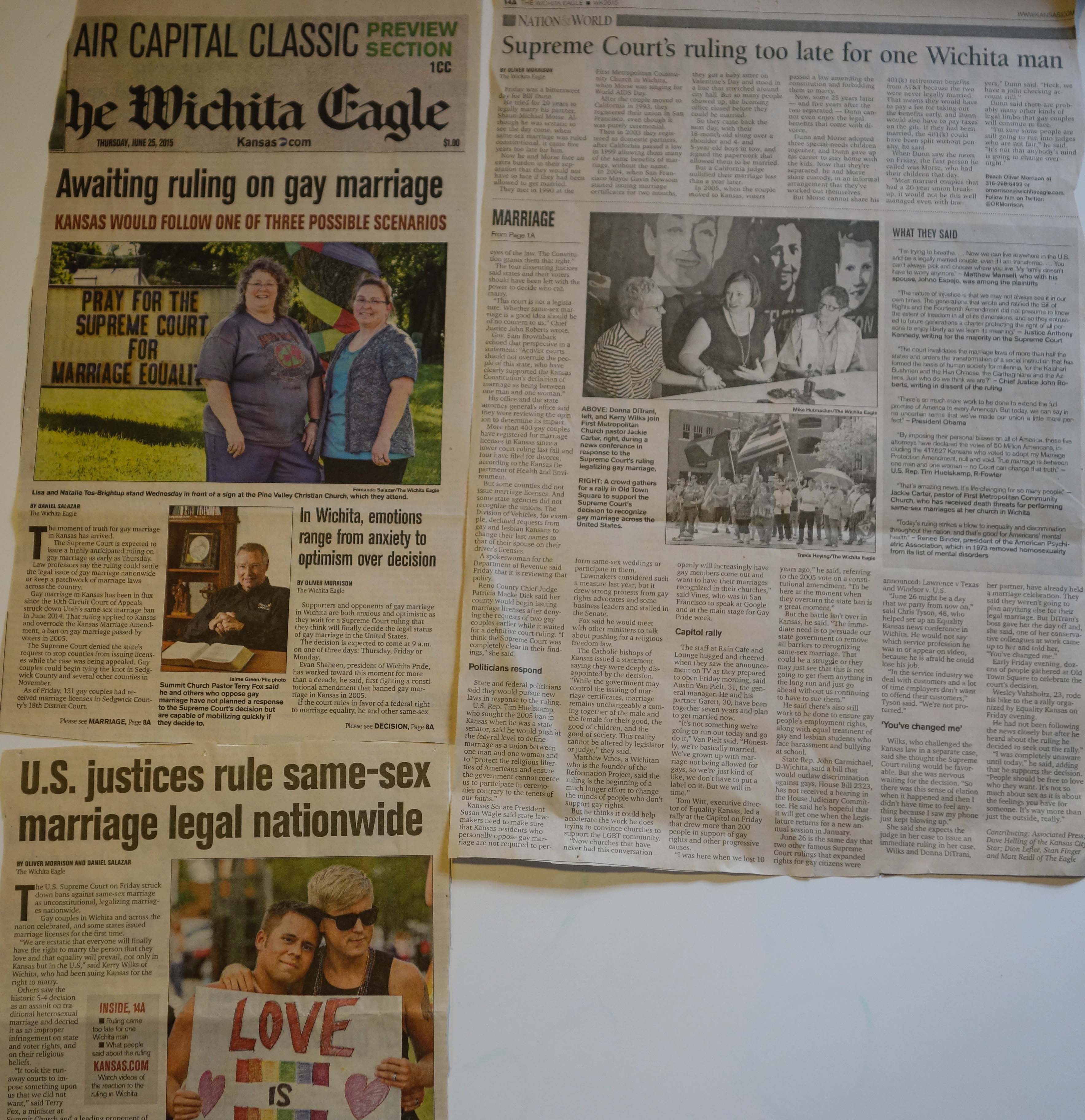 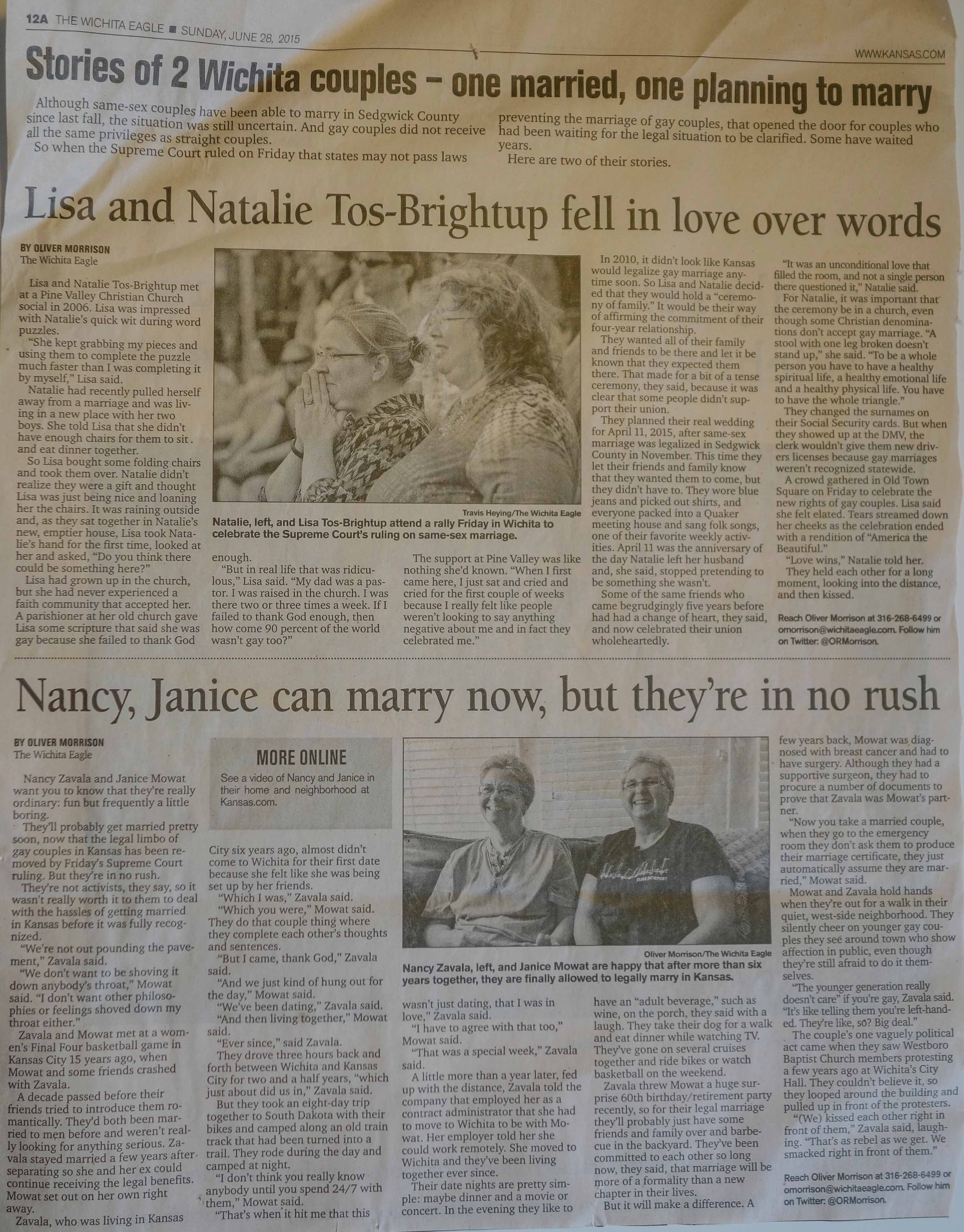 One couple who can get married now