November 7, 2015
“The most talented filmmaker nobody had ever heard of”

If you’re driving north on Mathewson under the highway, just north of 11th Street, you’ll drive by a two-story white house and an empty lot filled with mud, a few tall trees and a lawn that hasn’t been mowed in months.

Those who miss it can be forgiven for not recognizing one of the oldest and most unheralded movie production locales in Wichita: R.G. Studios.

Nick Pope, director of the Tallgrass Film Festival for the past 13 years, first heard about the studio last year when he received a copy of “Double Digits,” a documentary film about R.G. Miller, the lone artist behind the studio.

“I know people who have been making films in this community for decades,” Pope said. “And nobody knew of this guy R.G. Miller and what he was doing and how inspired he was.”

He passed a copy of “Double Digits” to the other festival organizers, who gave it a prime evening slot. It was rare to have a movie in the festival about someone from Wichita, Pope said, and unprecedented to have one about a Wichita filmmaker – let alone one who has made dozens of films and has been working since the 1970s.

The movie was so packed for the showing on Oct. 15 at the Scottish Rite Center that the festival opened the balcony. Indiewire, an independent film publication, selected the movie as one of Tallgrass’ 10 best. The director, Justin Johnson, received the award for best new filmmaker. And the festival created a whole new award category to honor Miller’s singular dedication to pushing the boundaries of filmmaking: The Golden Strands Vanguard Award.

But when Miller’s name was called at the closing gala, two nights after the movie’s screening, no one in the Orpheum stood up to receive the award because, as the supervisor of dishwashing at Ourr’s Family Dining, Miller had his arms submerged in suds….Continue reading

Austin Mann was alone in his room with the lights out on a Saturday night in 2005.

His friends were out drinking, partying, having fun. He was waiting for a drop of water to land in his blue cereal bowl. At the exact moment it hit the water in his bowl, he pressed the shutter down on his camera just as he triggered the flash.

And there it was: A ripple with perfectly curved rings appeared on the camera’s screen.

He’d been at this for hours. Finally, with the lights turned off, the drop of water appeared without a blur.

Mann, a Wichita native, has since gone on to travel the world shooting photographs that have been featured everywhere from National Geographic and the New York Times, to giant billboards on the sides of highways and the displays in Apple stores. Mann is now using his success in photography to help other freelancers and entrepreneurs.

But at that moment during his sophomore year at Baylor University in Texas, Mann was just messing around. He didn’t realize that, just after the biggest spiritual crisis in his life a few weeks before, he’d found his avocation….Continue reading

Erica Prather has been traveling the last couple of years.

She stopped home in Wichita for a couple of months recently to spend time with family.

She took a job as a barista at Whole Foods and sometimes bumped into old friends from Kapaun Mount Carmel High School, who are married and raise kids in expensive homes on the east side, she said. They sometimes tell her that they are jealous of her lifestyle, although other times she interprets their expressions as “What are you doing with your life?”

She’s 30, a woman and from Kansas. It’s this combination that she thinks makes some people a little uncomfortable.

If a man were traveling the world, from one adventure to another, she said, people would praise his testosterone-fueled courage. If she was younger, just out of college, people would give her space to figure out what she wants to do with her life.

And if she was from a coastal city rather than the Midwest, her choices wouldn’t seem that unusual.

While many people spend 50 weeks a year working in order to pay for two weeks of vacation, Prather is trying to create a life for herself where something like the reverse is true.

Instead of advancing in a career, amassing wealth or pursing a family, Prather said her life is now guided by a different compass.

“This is probably the best way to gauge how I make a decision,” Prather said: “Will I regret it if I don’t do it? If the answer is yes, then I do it.”…Continue reading 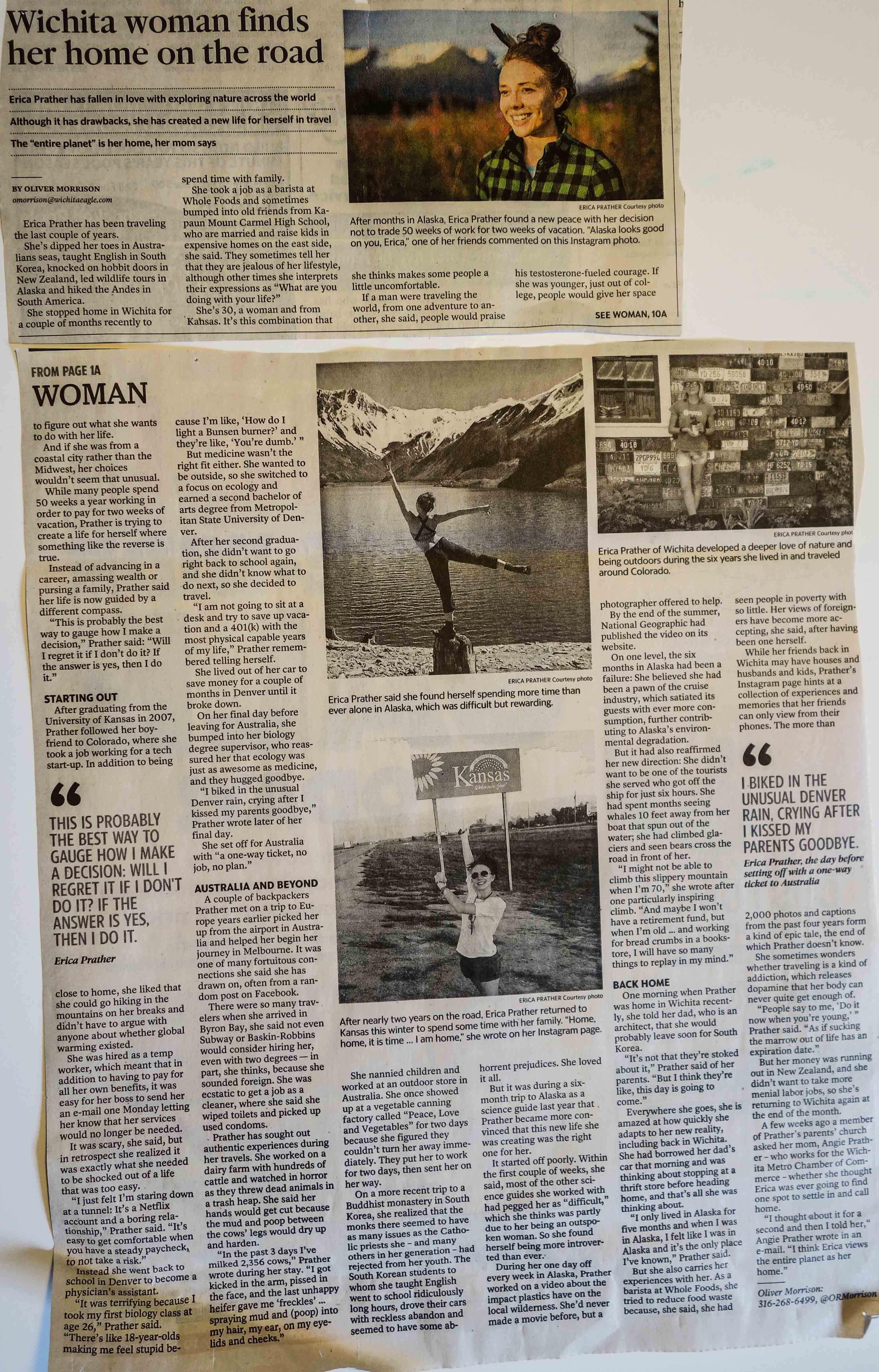